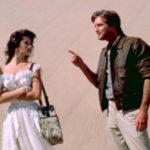 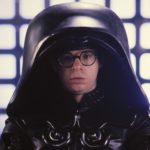 In the Mel Brooks’ comedy Spaceballs, there is a scene that begins with small likenesses of Princess Vespa (Daphne Zuniga) and Lonestar (Bill Pullman) that are being played out in a scene with someone doing fake voices of them.  It is soon revealed Dark Helmet (Rick Moranis) is the one playing with the likenesses in which he has his own likeness.

In his “play” he is acting out destroying Lonestar and seducing the Princess.  Dark Helmet has his back to the door.  But suddenly the door swings open as another character enters and Dark Helmet quickly grabs up the likenesses and hides them in front of himself blocking the person’s view.

Dark Helmet: “Did you see anything!?”

Colonel Sanders (in crisp military tone): “No sir! I did not see you playing with your dolls!”

Quick History Moment: These “dolls”-  better known as action figures action figures – did start out as dolls.  There was of course GI Joe but one of the early ones I remember that was related to movies or television was the Six Million Dollar Man doll with the left eye “missing” because it was a “telescope” so that you too could have bionic vision.  It wasn’t really until the late 70’s that we got the likenesses that we now recognize as action figures and they were a way that film companies could make additional revenue as well promote their film.  As Yogurt puts it in Spaceballs – “Moor-chen-dizing”

So back to my reaction: I’ve always looked at these action figures as almost works of art.  I liked having that tangible piece of my favorite movie.  I look at this as equal to another collector having a penchant for the art of Van Gogh.  But just like every collector you don’t buy everything out there.  You buy the ones you feel are worth collecting.  I, in particular, like to have the ones from various Sci-Fi films and tv. Being part of the industry I tended to actually put them into scenes.

Over the last 10 years, I have really ramped into high gear.  I started teaching filmmaking and one of my specialties when discussing productions is sets, costumes, and props and I have noticed that over this same period of time there has been a lot more attention to detail.  Stores have popped up like Think Geek.  Classic movies are now getting their own figures through retro toy companies.  There has been a surge in the collectible trade.  So now the need to be selective is even more prominent.  My selectiveness came from an odd idea – what would I be proud to put on display.

My “displays” really took off when my son was in high school.  I started hanging some things that were left in the packages like the very artworks I mentioned above.  They had to have an order and reason for placement.  I wouldn’t buy some items if they looked through together or didn’t match closely to the source. (Sorry Babylon 5, liked the show, hate your action figures.) I would buy it if it fit into the theme I had set for a particular area. (How many actors have played The Master in Doctor Who?)  But the most important thing was – what is seen when you enter the room.

Why?  Because it is the thing that made me realize I want to open a museum.  It started with my son and his friends then grew to friends, then friends of friends.  My son would say to a friend visiting “you should see my dad’s office.”  They would walk in and low and behold they would stop, eyes wide, and the silent “omg” as they looked around the room.  I got a proud thrill as each person was amazed by what they saw.

So much so that the display has grown to now encompass my entire home office, but all with a design, placement, and purpose. In my family room is a decorative display case, not for nicknacks and vases, but for the ships of Starfleet and the Thunderbirds. (With Galaxy Quest and Space 1999 thrown in).  All works of art, all happily on display, all causing that sight of joy.

But that’s nothing, you should see my son’s Godzilla collection!

All other images: Michael Hanly