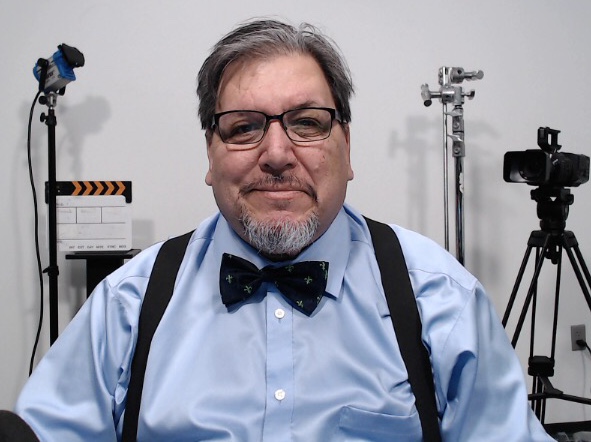 Michael’s career in the film industry began in High School where he created public service video documentaries for the Orange County, CA Public Cable System. After attending New York University Film Workshops he chose to pursue a Bachelor of Arts Degree in Cinema from Columbia College-Hollywood in California.

He was asked back to his alma mater by Brianne Murphy, ASC – now president of the college –  to redesign and lecture in their film editing classes. As full-time faculty for Watkins College of Art and Design Film School in Nashville, he created and classes in advanced production techniques and visual storytelling as well as aiding in the expansion of their program from an Associates Degree to a Bachelors Degree in Film Production.

To date, he has and continues to create curriculum, online lectures, and filmmaking demonstrations for class ranging from film production and advanced post-production through screenwriting and American film criticism. He holds a Master of Science in Entertainment Business and is co-author of the textbook “Visual Character Development in Film and Television: Your Character is Your Canvas”

While raising two wonderful children, Sharon kicked off her career as an assistant manager at several drug stores before transitioning into the world of academia. Taking on the role of Office Manager at Columbia College in Hollywood California, Sharon oversaw the financial disposition of over 200 students.

Taking a brief hiatus from finance Sharon moved on to the admissions side of education in 1997, when she became the Admissions Assistant at Watkins College of Art and Design and later transitioning into the role of Student Services Coordinator at Full Sail University in 2002. Never being able to stay away from finance and numbers for long, in 2015 Sharon embraced her role as Financial Aid Administrator at Full Sail University.

It was only natural that she would take her talents to the appropriate level by taking on the mantle of CFO for Silver Screen Paradise.

For nearly 20 years, Erik has been the Program Director/Vice President of Anime Festival Orlando (AFO), the first anime festival ever held in Orlando. Under Erik’s leadership, AFO developed the groundbreaking Interactive Convention Experience (ICE). This includes the creation of “Orlandia” The mythical land that forms the heart of an interactive adventure for convention attendees. In this convention adventure, attendee participants have seen swords and sorcery, steampunk, cyberpunk, magical creature combat, retro sci-fi, western sci-fi, and ancient Japanese horror. Erik brings to the board a wealth of knowledge and creativity that strengthens our mission statement.