Silence fell as my wife and I sat in front of the screen.  The video finally loaded and we watched as a lone figure strode out of the woods, the camera to their back, only their legs and back showing.  “It’s a woman, they did cast a woman” my wife and I said almost together, there was no question.  We watched the character barely in frame as we wondered WHO it would be.

To me the big moment was not just the reveal of the character. It came in a moment I had metaphorically suggested in my previous post.  There I referenced that each person playing The Doctor was being handed the key to the TARDIS upon taking the role.  And here, before we even know the identity, a hand stretches out with palm up ready to receive.

The key does, in fact, materialize into the new Doctor’s hand.  It appears along with the crescendo of the ever

familiar sound that is the arrival of the TARDIS.  It is at the moment the final wail of the engines cease that the reveal is made, the new Doctor looks up and smiles not at us, but at the TARDIS. Here for the first time, we see the face of the 13th Doctor – the face of actress Jodie Whittaker. 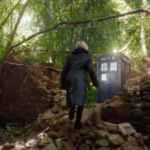 Key in hand, she literally steps up to the TARDIS to begin the challenge of being The Doctor.

However, I don’t mean the challenge of an actress, I mean that of the Doctor herself.  At the moment of regeneration the Doctor has never been sure who he is.  “I’m The Doctor, or at least I will be…” says the 5th Doctor as he unravels the 4th Doctor’s scarf.  The Sycorax ask the newly regenerated 10th Doctor a roaring echoing question of “who are you?” to which The Doctor roars back “I don’t know!”. And in an almost foreshadowing moment the 11th Doctor, hearing his voice for the first time, cries out “I’m a girl!” while grabbing his Adam’s apple.

So as the Doctor learns what new identity will emerge the audience follows along, trying to guess.

In forty-five seconds the BBC did what was needed.  This was never a reveal that The Doctor is now female, this was the first story of the 13th Doctor. Complete with a moment of guessing, a moment of triumph, a moment of reveal, and the anticipation of the moment that will only come after the regeneration.  It is the moment that the key, the TARDIS, and the slight smile at its appearance already silently told.  The moment that in our hearts we know we would love to hear for real:

And that’s all that counts