Now that the Daleks have invaded both the large screen for the first time and the small screen 50 years later I shall proceed to present a spoiler free review.  For this review, it will be assumed that the reader has some previous knowledge of Doctor Who and the idea of regeneration.

Even though this story would be the first time anyone was seeing the now called “Second Doctor”, the regeneration happen in The Tenth Planet and within minutes of the start of this episode it was over and done.  This story is firmly cemented in making sure that the new persona of The Doctor is front and center.  This couldn’t be a “new version” of the character, it had to be THE Doctor. 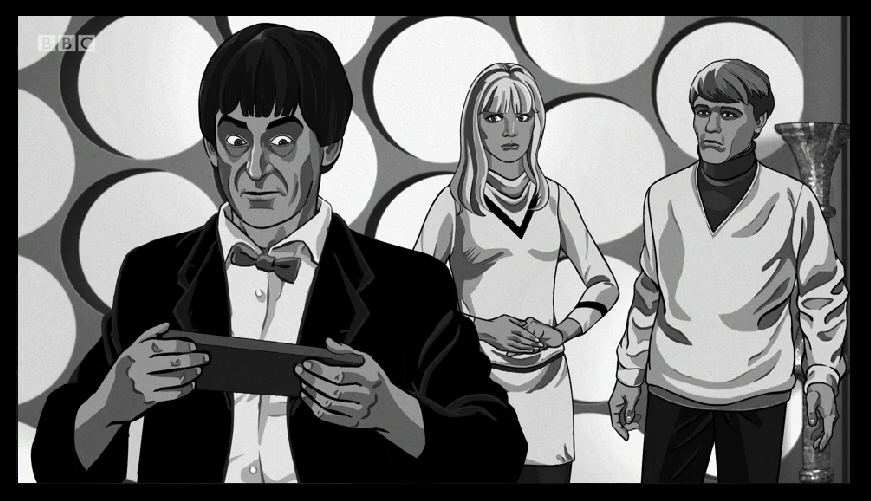 The story starts off by setting the precedent for what has become common for a regeneration today – The Doctor (now played by Patrick Troughton) is confused and needs to discover over time who he is. His traveling companions (Anneke Wills as Polly Wright and Michael Craze as Ben Jackson) deal with the shock of suddenly seeing the man they knew change before their eyes.

This “renewal” – as they called it – was unheard of, and from the looks of how things progress the storytellers obviously knew that they couldn’t dwell on the details of the change very long.  So after a few moment of the companions adjusting to The Doctor,  The Doctor adjusting to his new self, and the audience hopefully adjusting and engaged, the story leaves the TARDIS (as it should) and into danger onto the strange planet Vulcan.

The danger begins right away with The Doctor encountering a man identified as the “Earth Examiner”. The only reason we know this information is by a badge he is wearing because within moments of meeting The Doctor, the man is shot and killed.  In his bewildered state, the Doctor examines the body and for some reason puts on the badge. While he begins to explore for the murderer a group of colonists discover the Doctor and seeing the badge presume he is the dead man, who’s body is out of view in the distance behind.

With his meddling nature still intact,

The Doctor plays the role of the examiner to uncover who murdered the Examiner and why.  And thus is the tale set up of political power and ambition being played out amongst the backdrop of an earth colony facing rebellion. An over confident Governor, ambitious underlings, and double agents distract everyone as the overeager scientist Lesterson runs experiments on an ancient space capsule that holds a deadly secret – the Daleks!

I had never seen the story before November 14th, 2016 (50 years and 10 days after it first aired). I have never seen the recovered tele-snaps, read the novelization, or listened to the audio recordings so I was coming into this completely cold.  And that is how I liked it, I was seeing the story unfold as if it was a completely new thing – not a 50-year-old story.  And I had the chance to see it in a theater, like a proper premiere.

However, I also went into it with a little trepidation. I must admit, some of the early episodes of Doctor Who are hard to watch – even for me –  due to the fact that some of the early episodes sometimes contained “filler” story material.  “We need to have an extra week, let’s have them lose something and need to double back.” [Insert filler danger here] Power of the Daleks is six, 25 minute-ish, episodes (the length of a modern day blockbuster)  and I can honestly say none of it felt like filler.

Although this was edited together, rather in parts, you could feel the story building, adding layers to the conflict.  Some of it was a little predictable and cliche villainy, but you have to keep in mind that a cliche is only a gimmick that is overused.  This was 50 years ago – so sometimes we have to accept a cliche because it wasn’t one back then.

The Daleks are the Daleks, plain and simple!  They have one thought on their mind – control and exterminate all who are not Dalek.  But here they are also masters of deception due in part to there only being three active Daleks in the early parts of the story. It is a deception that seems to be a potential inspiration for a modern story.  The Daleks, to hide their true intent, play “servant” to the humans of the colony, with one even bringing someone a drink on a tray.

For those familiar with Victory of the Daleks – one of the first Eleventh Doctor stories I actually heard in my head “Would you like some tea?” in the voice of a Dalek as I watched this scene.

In that story, the Daleks played up the deception without hesitation.

But here it was much more intense because you can almost feel the unheard of tension in the Dalek’s voice as it is almost choking on its words.  “I am.. your… ser…vant.  I am your servant.” Each time the Daleks played subservient the more it seemed to anger them into advancing their plans faster.  The disgust of other lifeforms was really on display in  a creature that only had their voice to convey their attitude. Props to the voice actors Peter Hawkins and Gerald Taylor for this highly believable performance.

I will admit, with the entire thing being animated I was disappointed not to be seeing any of the original material like some of the previous reconstructions. In fact, The Tenth Planet is one of those part original, part animated releases. Due to the nature of the story and length of time, full frame by frame classical animation was not an option.

This may be due to the fact I saw this on a large screen, but the jerking movement of the entire body of the drawing tended to take me out of the story rather than keep me engaged.  It appeared that the only reason that they were drawing so much attention to the movement was so that you would not feel like you were just staring at a drawing with the lips moving.  Unfortunately, it happens at the very beginning of the story when The Doctor renews, and there was a lot of standing and stunned staring and at points where not a lot of action was called for. [For more information on the technical side, watch for an article on the reconstruction on our museum website www.shfmuseum.org].

If you can ignore some of the wibbly wobbly animation and let yourself get pulled into the story I don’t think you’ll be disappointed.

Power of the Daleks began streaming on November 18th, 2016 with each of the six parts being released a week at a time.  At the time of this writing, Parts 1 and 2 are available for digital purchase at $2.99 each on Amazon with the “season” available for $19.99.

The DVD is available for Pre-Order at shop.bbc.com with a release date of January 31st, 2017.  Based on the list of extras listed on the UK release, I’m waiting to buy the DVD.  I’ll report on the extras in a later blog.